The Senecio nevadensis or ´Suzón de Sierra Nevada´ is one of the more than sixty endemic plants of Sierra Nevada. There are other ´senecios´ to be found in the massif, like Senecio elodes, Senecio eriopus and Senecio quinqueradiatus, but this ´Nevada ragwort´ is the only one that can be found exclusively in Sierra Nevada. Its habitats are in the highest parts of the mountain range, between 2,600 metres and 3,300 metres in the ´pisos oro y crioromediterráneo´ (oromediterranean and crioromediterranean levels). This member of the daisy family can be found on steep stony slopes or ´canchales´ (´pedregales móviles´ or ´cascajales sueltos´, gravelly areas with unstable schist slabs). It caught our attention mid July because it has large stems (up to 30 cm) and it was still in bud. Many other plants in the area were tiny, colourful, with hardly any stems or leaves, peeping out of the rocks and in full flower; like the Chaenorrhinum glareosum, Iberis carnosa subsp emberger, and the Viola crassiuscula (violeta de Sierra Nevada or Nevada violet). When we went back early August, we saw this Senecios nevadensis in full bloom just below the ridge of the Loma de Piedra Ventana, a spot were the shepherds probably don´t come. We took another route back, so where we had seen a large number in bud, we did not see whether they had come into flower or not. This ´Nevada reagwort´ is listed as ´vulnerable´ and and therefore included in the ´Lista roja de la flora vascular de Andalucía´ (Red List of Vascular Flora of Andalusia). According to the information on this ´Nevada ragwort´ in Flora amenazada y endémica de Sierra Nevada there are only three populations (between 10000 and 15000 individuals). When we look at the small map in Flora amenazada y endémica de Sierra Nevada on which the known populations are located, we are to the right of them. The ones we have seen, might be a population the scientists are not yet aware of. It is a threatened due to its specific ecological requirements and extreme fluctuations of fruit production, depending on the climatic conditions. Because it flowers late, in years with a particularly early cold autumn, it barely comes to fruition. Apart from this, grazing constitutes another threat. This species was first validly published by the Swiss botanist Emond Boissier and his French companion George François Reuter in their Pugillus plantarum novarum Africae borealis Hispaniaeque australis (1852). 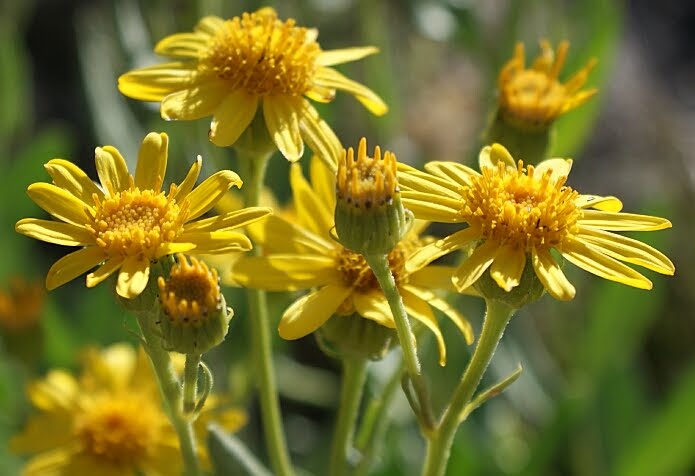