The Cerro del Gallo is with an altitude of 2,913 metres the highest summit of Bérchules. It is located on the northernmost border of our municipality that has a surface area of almost seventy square kilometres. There is little written about this summit that you can see while driving up from the Empalme de Bérchules towards the village. The Cerro del Gallo is mentioned in the new guide book ´Guía Turística de la Alpujarra de Granada`. It says that it is an important peak within the Sierra Nevada with an abundant endemic plant life. On the internet there are only a few websites with the personal experiences of hikers that write about climbing this summit. Most of these accounts are of people walking up from the refugio Postero Alto, something we did ourselves many years ago.
Last Sunday we decided to revisit `our` highest mountain, this time from the Plaza de los Lobos at almost 2,600 metres. To get there you follow the pista de la sierra from the Cruz de Juviles for twelve kilometres. Then you are at 2,000 metres and go up a track to your left that passes Cortijo de las Minas. There is no sign, but you recognize it by two small posts with a chain on the ground (hopefully) and a steep track that looks overgrown. For these last eight kilometres you probably need a fourwheel drive as it is not in a very good state.

The Plaza de los Lobos offers a spectacular view of the Mulhacén, the Alcazaba and the Chorreras Negras and is already worth the drive up. With a map and the GPS to orient ourselves, we followed the Loma de Piedra Ventana passing the Peñones del Muerto to reach the Puerto de Jerez. Then we followed the Loma de Albardas to reach the Cerro del Gallo. It was spectacular to walk on the ridges because of the views and the large number of butterflies (many ´apollos´). To re-experience the Cerro del Gallo in high summer was absolutely fantastic. The summit is a broad stone heap with plants growing between almost every stone. We recognized one endemic one, the Arenaria tetraquetra subsp amabilis, in Spanish known as piel de león, papo o cojin. The return route we walked about fifty metres below the ridge, crossing a number of snow fields and passing the source of the Río Chico. It was especially on our way back that we saw a large number of endemic plants like  Chaenorrhinum glareosum (espuelilla, dragoncillo), Iberis carnosa subsp embergeri (carraspique de Sierra Nevada), Jasione amethystina (botón azul de Sierra Nevada), Ranunculus acetosellifolius (ranillo de las nieves) and Viola crassiuscula (violeta de Sierra Nevada or Nevada violet). Our conclusion at the end of the day was that going up our highest mountain, the Cerro del Gallo, is one of the best kept secrets of the sierra. 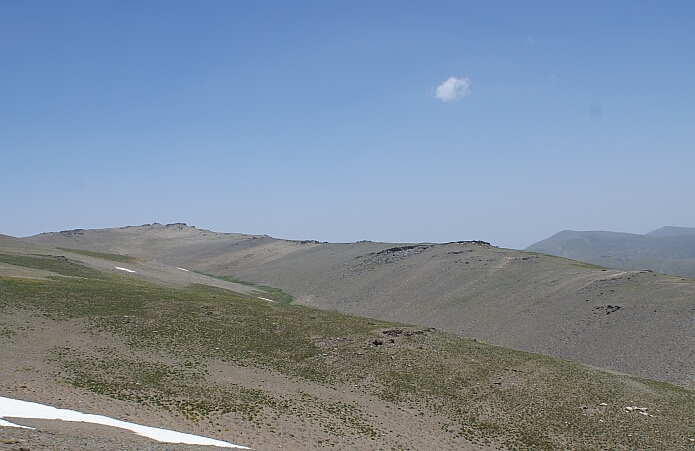 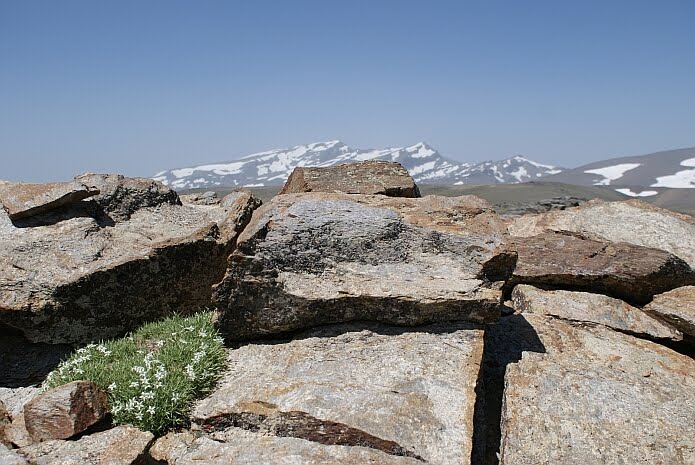