Introduction to the Alpujarras

This weblog started in July 2008 as an extension of the website of our country hotel in Bérchules. We decided to take the Alpujarras, our passions and informative value for potential visitors of the Alpujarras, as the scope for our articles. 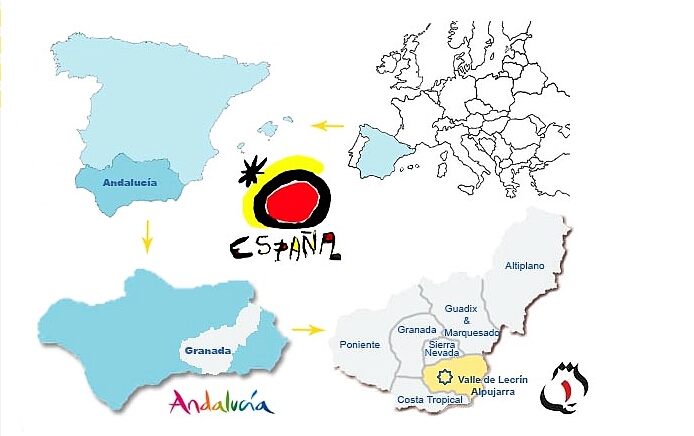 As this weblog is growing and becoming an Alpujarras information source we realized that in this blog this region was not even properly introduced.

In this article we would like to correct this and therefor extracted the module Alpujarras from our website http://www.elparaje.com/ and added a permanent link to this article in the side column.

Use the pointing hand at the bottom right to go to the next page !!
(Iexplorer: CTRL F5 to reload skipping cache if needed)


The Alpujarra is a region with a variety of scenery of great natural beauty. It stretches from the Sierra Nevada in the north to the Mediterranean in the south, and from Lanjarón and the Sierra de Lújar in the west to Ohanes and Punta de las Entinas in the east. A little bit more than half of its surface is part of the Granada province, the rest of the Almería province.In the high Alpujarra you´ll find picturesque mountain villages, in the valleys and along the coast a few bigger towns and in the Contraviesa small hamlets scattered between vineyards.One of the most interesting aspects of the mountain villages is their vernacular arquitecture. Whitewashed cubic houses are built one above the other. These houses with their flat roofs and chimneys in the form of truncated cones, are built against steep slopes. Small passageways are created by the ´tinaos´ or porches that span narrow village streets.
This Alpujarran style of building cannot be found in any other part of Spain and was probably introduced by the Arabs.Archaelogical remains found in the Alpujarra region indicate that the origins of human settlement date back to 3500 B.C. Then the Phoenicians, Greek and Romans had successively occasional settlements near the coast, but probably not ventured far inland because of the difficult accessibility.
Nevertheless a few remains of the Roman period can be found, for example a bridge in Mecina Bombarón and cobbled paths and mines in La Taha.

The population reached its highest levels during the presence of the Arabs. They were the first to start building villages in the high Alpujarra. Of the fortresses that they built a few remains are left. But where they had once built mezquitas, churches arose after their expulsión, some in Mudejar style. The Arabs introduced new crops and a system of terraced farming. Their knowledge of irrigation techniques, making use of an extensive network of ´acequias´ or water channels, created a prosperous arboriculture and silk industry.
The Arabs had shown how to adapt one´s way of life to the surroundings. They had the ability to make use of the available water in such a way, that, amongst others, poplars, chestnuts and mulberry trees, could grow here. These ´semicultvated´ trees give the high Alpujarra its lush character up to today.
The low Alpujarra is characterized by beautiful groves of olives, figs, almond and and citrus trees.

The Sierra de la Contraviesa is the mountain range between the Sierra Nevada and the Mediterranean coast and is best known for its wines.De vineyards situated at nearly 1400 metres are among the highest to be found in Europe.It had been a wine producing region for many centuries until in 1833 the phylloxera almost made an end to it all. A few farmers planted resistent varieties of grapes, others replaced the vines for almond and fig trees, but a great many people left the area completely.Most farmers that had stayed, continued their family tradition of producing ´vino de la costa´, a young fruity rosé coloured wine on a small scale. Nevertheless, in the early eighties a few enterprising winegrowers rediscovered the area and started experimenting with quality varieties, as well as with the indigenous types like the vigiriego grape for the white wines. Thanks to the hard work and perseverence of these people its now also possible to enjoy quality wines and cava´s from the Alpujarra.