The Viola crassiuscula is one of the more than sixty endemic plants of Sierra Nevada. There are other violas in the massif, like Viola palustris and Viola riviniana, but this Nevada violet is the only one that can be found exclusively in Sierra Nevada above 2,500 metres. It is a perennial and multi-stemmed species (caespitose) with flowers that range from violet to pinkish to white. After flowering, small fruit capsules are produced that split open by way of three valves to release tiny seeds. As there are few insects in the high peak area, flowers need to compete to be pollinated. The flower needs to seduce the insect with attractive colours and well developed petals. The flower is relatively large compared to the size of the plant itself. In Sierra Nevada the precious viola can be found between cracks in the rock faces. It is small and it has a minimum of foliage in order to minimize the loss of water by transpiration. Having little folliage makes them also less interesting for the mountain goats. It finds shelter by the rocks so that the negative effect of the strong solar radiation, typical at this height, is minimal. The rocks also protect them from being eaten or trampled. These are a few examples of the adaptations through thousands of years to survive the harsh climatic circumstances of the ´pisos oro y crioromediterráneo´ (oromediterranean and crioromediterranean levels). The most striking adaptation is its ability to sprout from the root collar that goes as deep as the ´stable´ ground. Because of this adaptation, the Nevada violet can survive on steep stony slopes or ´canchales´. This are ´pedregales móviles´ or ´cascajales sueltos´, gravelly areas with unstable schist slabs. When the slates or stones move and the stems break, the plant is able to sprout again. Viola crassiuscula was scientifically catagolized by the French naturalist Jean Baptiste Bory de Saint-Vincent (1778-1846), who published in 1820 his Florule de Sierra Nevada. Viola crassiuscula is listed as rare and vulnerable, and therefor included in the Lista roja de la flora vascular de Andalucía (Red List of Vascular Flora of Andalusia). It is said that it is more common where the human presence is more limited. Personally we did see the Viola crassiuscula at one of the busier areas, namely very close to the top of the Mulhacén. We also saw a number of these botanical jewels where we think very few people go, namely near the source of the Río Chico de Bérchules, not too far from the top of the Cerro del Gallo. We were really pleased to see a few white ones, which are said to be less common. 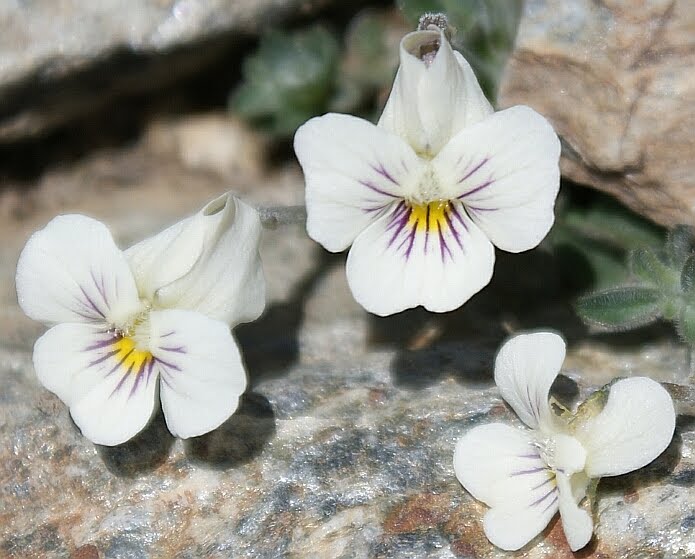