The Chaenorrhinum glareosum or ´Nevada dwarf snapdragon´ is one of the more than sixty endemic plants of Sierra Nevada. There are other snapdragon-like flowers in the massif, like the Chaenorrhinum villosum subsp granatense (´little dragons´) and Chaenorrhinum macropodum subsp macropodum, but this is the only one that can be found exclusively in Sierra Nevada. Its habitats are in the highest parts of the massive, above 2,500 metres in the ´pisos oro y crioromediterráneo´ (oromediterranean and crioromediterranean levels). The ´espuelilla´ or ´dragoncillo´ can be found on steep stony slopes or ´canchales´ (´pedregales móviles´ or ´cascajales sueltos´, gravelly areas with unstable schist slabs). Like the Viola crassiuscula, this perennial herb is able to sprout again after the stem has broken. This member of the figwort family also grows in psychro-xerophilous (cold and dry) pastures that are dominated by perennial grasses and small shrubs. It can also form part of the communities formed by species adapted to live in the cracks of rocks. These communities are very diverse and their composition is influenced by various factors such as orientation, steepness of the slope, level of sunlight and insolation, humidity, depth of the soil and the accessibility of the terrain for herbivorous mammals. This makes that each plant of such a community is linked to a characteristic microhabitat. As there are few insects in the highest parts of the massif, flowers need to compete to be pollinated. The flower needs to attract the insect by well developed petals with attractive colours. According to Gabriel García Guardia, the author of Flores silvestres de Andalucía, the Chaenorrhinum glareosum with its tiny purple flowers with yellow throats, is one of the most beautiful plants of the Sierra Nevada. Maybe that´s why it has been able to withstand to competition so far and is at the moment not considered rare or vulnerable. We have seen this mountain jewel a number of times, close to the top of the Mulhacén and close to the top of the Cerro del Gallo, amongst others. 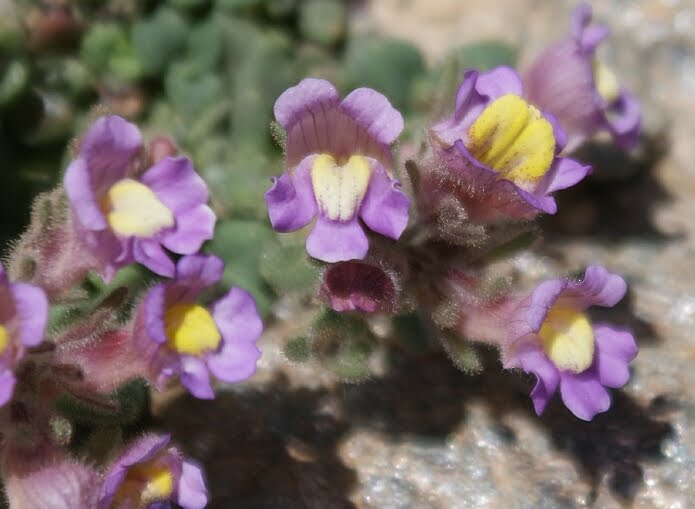