The endemic flora of the Sierra Nevada

On this blog we quite regularly write posts on the local flora as we love the botanical wealth of the area. In the Sierra Nevada there are over 2,100 catalogued species and subspecies. Spain is the country with the highest number of endemics (176 national ones) and Sierra Nevada is the area with the highest concentration of endemic plant species in the whole of continental Europe (80 species according to the on-line magazine Waste). The idea that it is the only area where it can be enjoyed or photographed makes us feel priviliged when we see a plant endemic to the Sierra Nevada.  An ´endemismo nevadenses´ can sometimes only be seen in one or two locations within the mountain range. It is suggested by some people that we owe the high number of localised plants partly to the ice ages. During the last ice age, the only region with a climate favourable for plant life, was the present-day Mediterranean region. When the years became colder many plants shifted their range southwards where they took refuge on the relatively warm south-facing slopes of the mountains. The Betic Cordillera, to which the Sierra Nevada belonged, held many important refuges. As Europe warmed up again, some of these plants shifted back north, while others retreated to the high parts of the mountains and adapted to the prevailing conditions. This is why the summits of the Sierra Nevada, while appearing almost barren at first glance, in fact display the highest number of ´unique´ plants of the whole of Europe.  As many formed their own biological communities, visitors interested in the flora can easily see a number of unique species once they are at an altitude higher than 2,300 metres. Between thirty and forty percent are to be found in the marshy grasslands known as ´borreguiles´ or on the steep rocky slopes close to the summits known as ´canchales´. The uniqueness also implies a great risk. Endemic plants can easily become endangered or extinct because of their restricted habitat and their vulnerability to the actions of man or climate change. Fortunately almost all endemic plants can be found within the boundaries of the Parque Nacional de Sierra Nevada and therefore monitored and protected. Most of them flower in July and August, so this is still the time to go out and enjoy the unique botanical jewels of the Sierra Nevada. We will continue to dedicate articles to them (see posts label flora-endemic), indicating where we encountered them, whether there were a large number or just a few and any pecularities we think are worth mentioning. 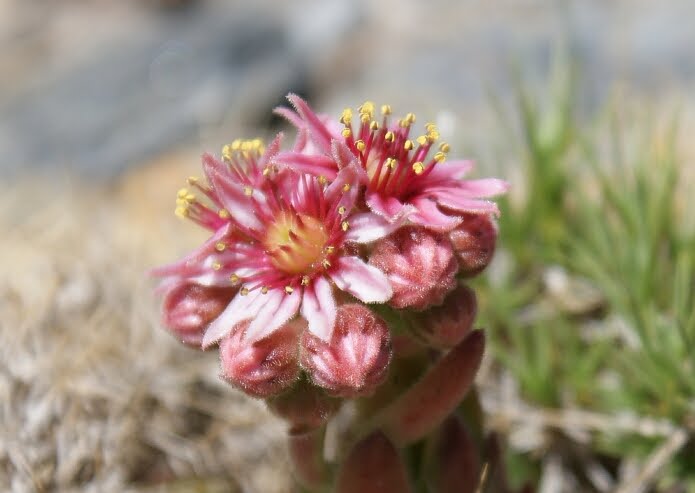