There are plant species which are widely distributed in Europe, while it has a subspecies that is endemic to
Sierra Nevada. This holds true for Gentiana pneumonanthe subsp Depressa. This blue-flowered gentian can be found in an area that is almost twenty kilometres long, albeit interrupted due to its ecological requirements. The number of individuals capable of flowering is estimated between 5000 and 10000.
This subspecies of the Marsh Gentian grows at altitudes between 2,200 and 3,200 metres, in the oro- and crioromediterranean levels. The factors that determine its scarcity are the ecological requirements and the limited number of suitable habitats for its development. Its habitats are high mountain pastures, known as ´borreguiles´ and peat bogs. This Gentiana pneumonanthe subsp Depressa and four other gentians that inhabit the marshy meadows of Sierra Nevada are listed as ´vulnerable´ and on the list of endangerd species, the Lista Roja de la Flora Vascular de Andalucía. This is because their habitat, the ´borreguiles´ are affected by overgrazing, the changing of water courses and tourism.  Three weeks ago we saw a fairly large number of this endemic Marsh Gentian along a small stream flowing into the Barranco de las Albardas at an altitude of 2,550 metres. 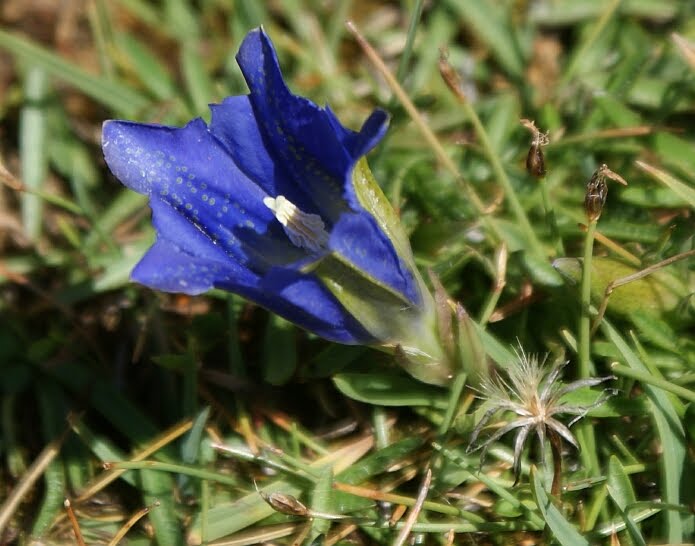