The Iberis carnosa subsp embergeri is one of the more than sixty endemic plants of Sierra Nevada. It is a small type of candytuft with lovely white or pinkish flowers. Its habitat are pastures with little vegetation on steep rocky slopes and ´cascajares´ (steep slopes of relatively unstable mica-schist slabs). It grows in windy areas with a high insolation between 2,900 and 3,200 metres (criomediterranean level), often accompanied by Linaria glaciales, Viola crassiuscula and Artemisia. It starts flowering in June, whereas most other plants in this bioclimatic zone start flowering in July. It can also be found at the highest parts of the oromediterranean level, accompanied by Sideritis glacialis, Arenaria tetraquetra subsp. amabilis, Thymus serpylloides, Hormathophylla spinosa, Arenaria pungens and Erodium cheilanthifolium. It passed from the list of ´vulnerable´ to ´endangered´. One of the risks is overgrazing by herbivorous mammals. Tourism constitutes another threat. According to the information on this ´carraspique de Sierra Nevada´ in Flora amenazada y endémica de Sierra Nevada there are only two populations (between 12000 and 15000 plants). These are close to classical hiking routes (Loma Pelada), and this is one of the reasons why it passed to the list of endangered species. This situation implies a great risk, if something happens to one of the populations, the situation becomes very alarming. We (think we) saw this endangered iberis close to the top of the Cerro del Gallo. If this is correct there must be another population. When we look at the small map in Flora amenazada y endémica de Sierra Nevada on which the two known populations are located, we are to the right of them. We will try to find out whether this is true. If so this would be good news, as ´our´ iberis is relatively far from any classical walking route. 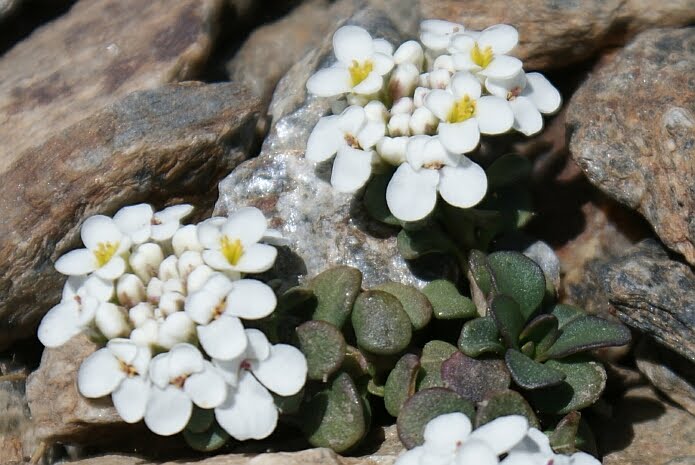