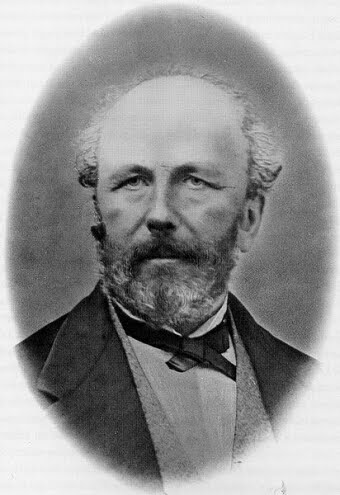 The Swiss botanist Edmond Boissier (1810-1885) is regarded as the discoverer of the Andalusian flora. He started his botanic explorations of Andalusia in the year 1836 and his first findings were published in a pamphlet in which he described about two hundred plants. More exploration trips followed between 1837 and 1845. After seven years of preparations, his work devoted to the botanical wealth of southern Spain, ´Voyage Botanique dans le Midi de l’Espagne pendant l’année 1837` was published. This work has a set of 208 magnificent botanical drawings and a catalogue of 1900 species that constitutes ´an extensive botanical geography of the kingdom of Granada´. As Boissier also described his experiences, it is also seen as an interesting travel guide. On the website of the on-line exhibition ´Luces de Sulayr´ (entrar-descubrir-galería de personajes) we can find a summary of his botanical explorations in the Sierra Nevada. “He was offered a room in cortijo de San Jerónimo, which became his base. At first he concentrated on the areas around el Dornajo and the Trevenque, and he was immediately struck by the number of species unknown to the scientific world at that moment. After his first excursion he decided to stay higher up at the Prados de las Yeguas and later in the Cueva del Panderón, close to the Veleta.” In 1849 he returned with George-Francois Reuter (1805-1872), who became his travelling companion, collaborateur, curator of collections and librarian. Bossier who was financially independent, healthy and strong, a born traveller and mountaineer, visited Spain nine times. It is said of him that he was gifted with unusual mnemonic powers and a consistent worker. He travelled to many countries all over the world and described more than six thousand new species. In ´Boissier´s diagnosis´ by Frans A. Stafleu we can read: “Much of the secret of Boissier´s productivity certainly lies in his close association with his equally enthousiastic and dedicated companion George-Francois Reuter.” They travelled to northern Africa together and made significant contributions to knowledge of the relationship between Andalusian and North African flowers. They published their findings in ´Pugillus plantarum novarum Africae borealis hispaniaeque australis´ in 1852. Boissier validly published a large number of botanical names of plants he encountered in the Sierra Nevada, many of which are now classified as ´endemic´, as they have so far not been seen anywhere else. Because of Boissier´s close co-operation with Reuter, we sometimes see both their names as authors of botanical names of species inhabiting the mountain range. After their publications, many botanists followed in their footsteps and expanded the knowledge of the flora of the Sierra Nevada.