We were pleasantly surprised by the number of flowering plants we saw close to the top of the Mulhacén last Sunday, the twelfth of July. We had read in a guide to the Natural Park of Sierra Nevada of the Junta de Andalucía that although this crioromediterranean level (altitudes above 2,900 metres) seems completely bleak, it in fact shelters more than sixty endemic species. But up to the moment you have witnessed this yourself, it might be difficult to imagine. We saw, amongst others, the endemic nevada violet (viola crassiuscula or violeta de Sierra Nevada) and tarragon (Chaenorrhinum glareosum or Espuelilla) while walking up the Loma de Mulhacén. While getting closer and closer to the summit, we became very curious to find out what actually would be the highest plant of Spain. It turned out to be the Saxifraga nevadensis or Romperrocas de Sierra Nevada. The author of the botanic name Saxifraga nevadenis is Edmond Boissier, who wrote about this Nevada saxifrage in his work Diagnoses plantarum orientalium novarum (1856). Different authorities on the flora of this national park, give a different minimum height of this plant according to the on-line magazine Waste it grows above 2,100 metres and on the website of the Ministerio del Medio Ambiente del Gobierno de España it says that it grows above 2,600 metres. On the website of Waste magazine we can also read that it is on the list of endangered species in Andalusia, the Lista Roja de la Flora Vascular de Andalucía. We took the photograph of this endemic plant about ten metres from the top, at about of 3,470 metres. This Nevada saxifrage is a member of the saxifrages or stone-breakers. The Latin word ´saxifraga´ means literally "stone-breaker", from Latin saxum ´rock´ or ´stone´ and ´frangere´, which means ´to break´. "It is usually explained by reference to certain saxifrages' ability to settle in the cracks of rocks. " This Saxifraga nevadensis is an archetypal saxifrage, but the name ´rock-breaker´ could have been used for many other species in this segment as well. It is incredible to see the variety of beautiful flowers that grow in the tiniest irregularity or fissure of the steep high slopes Sierra Nevada. There are saxifrages similar to the Saxifraga nevadensis to be found in the Pyrenees, like the Saxifraga pubescens. Other species of saxifraga to be found in Sierra Nevada are: Saxifraga erioblasta, Saxifraga granulata, Saxifraga oppositifolia, Saxifraga stellaris subsp robusta and Saxifraga trabutiana. 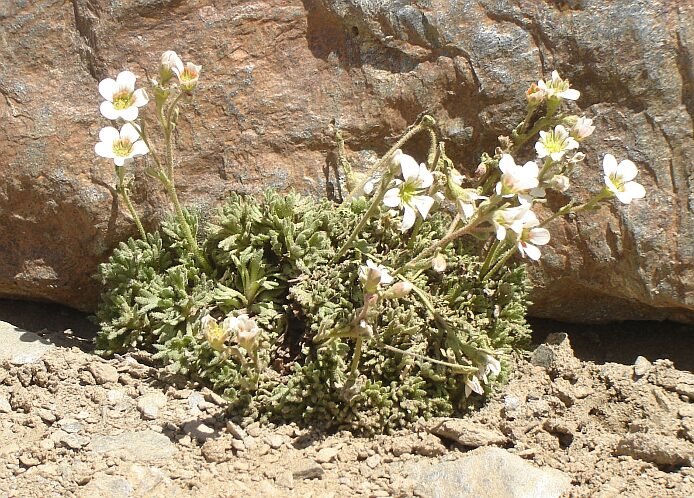