Ascent of the Mulhacén in high summer

An ascent of the Mulhacén (3,482 metres) is an attractive option for walking in high summer. For those who can not or do not want to cover the almost two thousand metres height difference from Trevélez, there are two options. The first one is to drive up to the Hoya del Portillo (2,150 metres) from Capileira. The second one is to make a reservation for the bus service up to the Alto del Chorillo (2,710 metres). This ´Servicio de Interpretación de las Altas Cumbres´, is a bus service from Capileira (about one hour) during the weekends and bank holidays in the summer. Information can be found on the website of the Ministerio de Medio Ambiento del Gobierno de España. It is advisable to book the minibus in advance, as we found out that at the height of the season it can be booked up for several weeks ahead. Luckily two seats became available for us last Sunday.
Two minibuses went up at 08.30 hours. The guide in our bus treated most things as a joke and it was therefore not a very serious environmental interpreting service. We had 6,5 hours before we would need to be back at the Alto del Chorillo (also called Mirador the Trevélez). Within this time period it was possible to go up the top of the highest mountain on the Iberian Peninsula via the Loma the Mulhacén (route 22 on this map) and return on the ´Carretera de Veleta´ without having to hurry. There was enough time to take photographs of the mountain goats and the special flowers that can be enjoyed on this route this time of the year. On the top of the Mulhacén there was a gathering of walkers, runners and mountain bikers of different ages and nationalities. If you want to be on the top alone, you better avoid the summer weekends. We found out that the bus back can be a quite a bit later – almost an hour - as planned. Our advise is therefore to be well prepared for warm as well as cold weather, as there is no shelter. This is a useful link with the weather forecast for the Mulhacén. Last Sunday the temperatures were quite pleasant, but the ultraviolet rays were very strong as often happens in July and August. 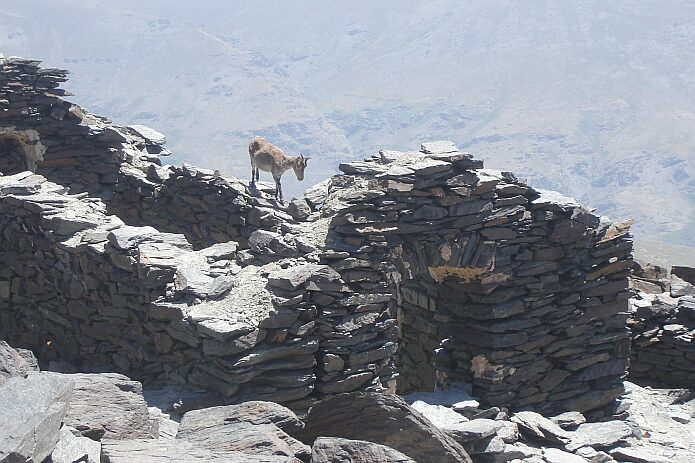