The Papaver lapeyrousianum is one of the botanical jewels we photographed near the top of the Mulhacén on the twelfth of July. We saw a few of these orange poppies while walking up on the Loma, but also while descending towards de Carretera de Veleta. The sierra poppy grows in the Pyrenees as well, but as it is considered an independent subspecies, it is known as ´amapola de Sierra Nevada´. This Papaver lapeyrousianum grows in the crioromediterranean level, between 3,200 and 3,450 metres. This is what we can read in ´Flora amenazada y endémica de Sierra Nevada´(pdf 18 MB) of Gabriel Blanca López that was published by the University of Granada in 2001. It also states that it is an endangered species. There is in the Sierra Nevada only one population that consists of not more than 2,500 plants. The ´cabra montés´ constitutes one of the threats, because of direct consumption as well as nitrifaction. On the same day that we took this picture, we actually saw quite a large number of mountain goats. We hope that there remains a good balance, because it would be a shame to lose this beautiful mountain poppy. 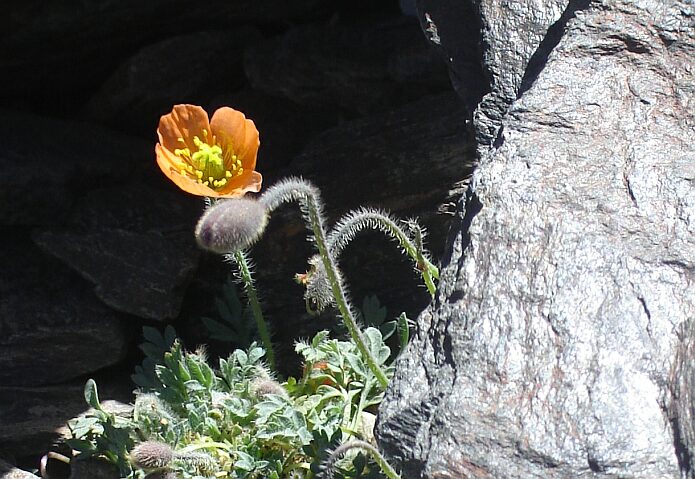