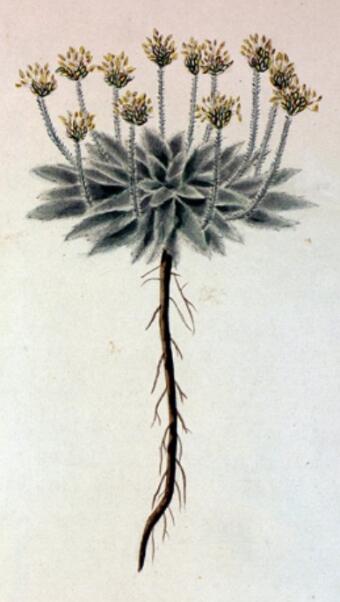 The Plantago nivalis or ´estrella de las nieves´ is one of the more than sixty endemic plants of the Sierra Nevada. This ´snow star´ can be found at altitudes higher than 2,300 metres in the ´pisos oro y crioromediterraneo´ (oromediterranean and crioromediterranean levels). This alpine species has a preference for areas where the snow remains for a long period and the borders of high mountain meadows, locally known as ´borreguiles´. The ´snow star´ is a regarded as a bioindicator of this habitat. It presents a number of climatic adaptations. Its leaves hold water and the coating of soft white hairs (pubescence) protects the plant from cold temperatures, prevents evaporation and reflects the strong solar radiation. As the ´snow star´ grows very close to the ground it is a protected from strong winds. The flowers of this plant are grouped in a small head at the end of a long stalk, so as to facilitate the dispersion of the polen by the wind to other plants nearby. According to the text on this Plantago nivalis on the on-line magazine Waste, it has - together with Edelweiss - the legend of being the flower of eternal love as the leaves of the star do no dry out. “People had the tradition to give it do their beloved ones as a token of their eternal love." Nowadays it is a protected species that can not be collected and considered one of the emblematic species of Sierra Nevada. It is the symbol of the Sulayr Long Distance Footpath and can be seen on the wooden waymarkers of this GR-240. The Swiss botanist Edmond Boissier encountered the ´snow star´ on one of his explorations in July 1837 when he went up the Barranco de Benalcázar towards the summits. As he was the first to publish the Plantago nivalis, he is regarded as the author of this botanical name. A drawing can be found in his ´Voyage Botanique dans le Midi de l’Espagne pendant l’année 1837´ (page 181). We saw many ´snow stars´ in the valley of the Río Chico of Bérchules on the first Saturday of august. It is not a threatened species, so it is a species that any visitor interested in the local flora should encounter easily. What is not easy, is to see it in bloom, as this is only for a very short period. 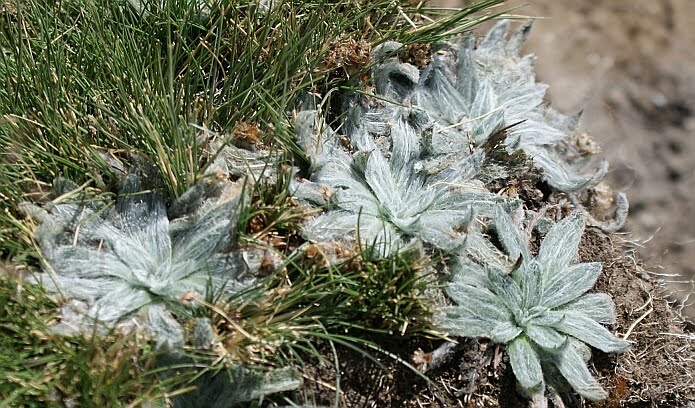