This year we had a large number of sunny days with nice temperatures in January, which means that in the lower parts of the Alpujarra the almond trees started to blossom relatively early. To enjoy this spectacle we decided to check the Sendero Local ´Pedro Antonio de Alarcón´. This is a linear walk of 8,3 kilometres that connects Torvizcón with the Venta del Chaparro, close to Haza de Lino. The height difference between the village and the ridge road - the GR 5204 - with its spectacular views is about 700 metres. The route is named after the Spanish author Pedro Antonio de Alarcón, who travelled through the region on mule back in the spring of 1872. In his travel book ´La Alpujarra´, he described the steep climb up from Torvizcón as one of the most demanding stages. As we felt like enjoying the almond blossom in a leisurely way, we got ourselves dropped off at the highest point in order to be able to walk down to Torvizcón. We had downloaded the GPS track from the website of Alpujarra Turística and found out that this is essential to find the route. There are wooden marker posts, but the waymarking is done in one direction only, starting in Torvizcón. There are also a number of cairns, but not enough to find the small paths that are often a bit hidden between the vegetation. Sometimes you need to cross vineyards, almond and fig orchards and when they are recently ploughed you tend to stay on the dirt tracks instead of entering the fields. These are the things that make the route really attractive though. It feels as if you enter into the heart of the Sierra de Contraviesa. In all directions we saw thousands and thousands of almond trees in full blossom and got completely submerged into this show for hours with only peace and quiet around us. The nice thing about walking down is that we could also contemplate the snowcapped Sierra Nevada in front of us all the time. 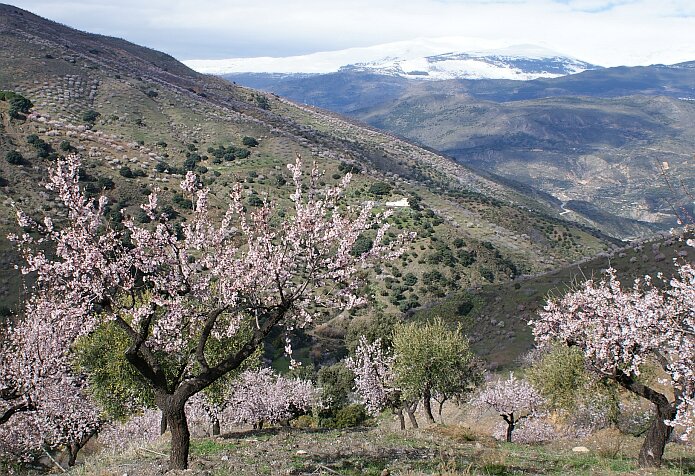 Related links:
- The Almond Blossom Appreciation Society, an article on this book written by Chris Stewart from his website Online El Valero

So lovely - I have made this photo the desktop on my computer (I hope that is ok).

Thanks Laura. Of course no problem. If you give me you´re email Ican send the high resolution version.