Yesterday, the 20th of December, the first stone was laid for ´Alpujárride´ - Centro Temático del Vino that will be built high above Torvizcón on one of the hill tops of the Sierra de la Contraviesa. This centre will contain a winery, an interactive museum and a restaurant. It is an initiative of Ignacio Nestares who mentioned in his speech that five generations of his family have been making wine at fince Juan de Reyes. After his grandfather had died there were a number of years that he did not visit the cortijo, but one day when he went back with his father and he became fascinated with the idea to continue with the tradition of wine making. Visiting other bodegas the idea grew that he not only wanted to reinstate the seven hectares of vineyards and make good quality ecological wines, but that he also wanted to develop a centre that would be attractive for visitors in more respects. The result is this idea of an interactive museum  in which all aspects related to the history of wine making in the Sierra de la Contraviesa will be explained making use of the latest technology. People will be invited to participate in the harvest and gastronomic workshops will be organized. The aim is that people who visit ´Alpujárride´ will have a singular, unforgettable experience.
We think that its location is flabbergasting and will already leave a lasting impression on everybody visiting the centre. It is situated on the top of a hill at an altitude of 1,389 metres, four kilometres from Haza del Lino. Looking southwestwards you see Monte Salchicha with an altituted of 1,545 metres the highest mountain of the Sierra de la Contraviesa. North- and eastwards you can contemplate the majestic Sierra Nevada and southwards the enchanting Mediterranean Sea. The local linear walk Ruta Pedro de Alarcón that starts in Torvizcón passes right at its doorsteps. Arriving at a place like this after having climbed seven hundred metres through vineyards, almond, fig and olive groves will be unique. We are looking forward to it. The first phase is expected to be completed in June 2011. In the meantime we would like to wish Ignacio and his family all the best with their project. 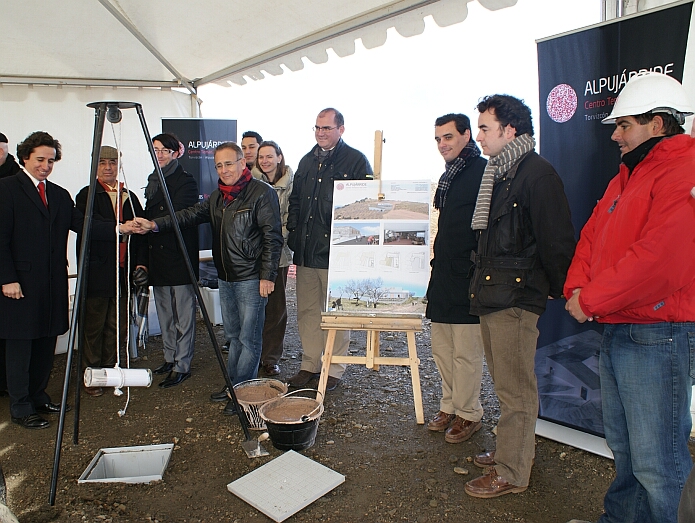 Official start of the Alpujárride proyect with Ignacio Nestares (to the left), David Moreno the mayor of Torvizcón and José López Gallardo as Diputado de Turismo de Granada laying the first stone. 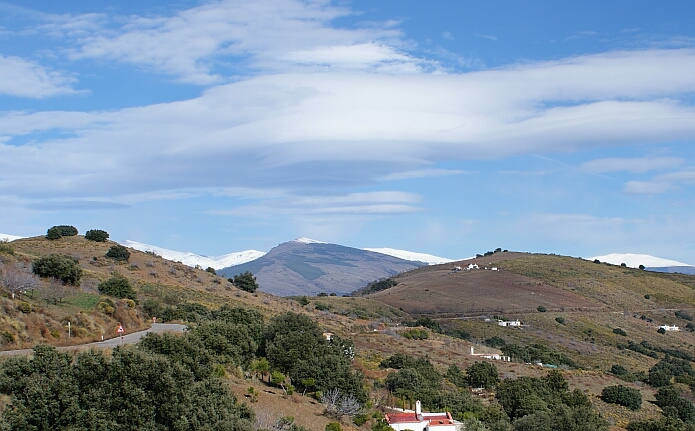 Above the GR-5204 at about km-4 you can already see the white containers on the construction site. Alpujárride will have a unique location to attract visitors to the Contraviesa part of the Alpujarras.