There are many irrigation channels in and around our village, but there is only one that carries the name ´Acequia de Bérchules´. This is an irrigation channel that runs for a large part at an altitude of about 2,500 metres. It takes most of its water from the Barranco de las Albardas in the Trevélez valley. It was built more than ten centuries ago by the Arabs. Water transported by this acequia has always been used to supply fountains and for irrigation of the land. After many people left the area in the fifties of the last century, this acequia fell in disrepair as it was no longer maintained. When the Sierra Nevada was declared Parque Nacional in 1999, the restoration of the ´acequias de careo´ in the high parts of the massif was one of its priorities. In the summer of 2006 a group of nine men from our village went up the Plaza de Lobos each day to work on its restauration. Everything was done in the original way, in other words manually. From the mountain slopes great blocks of stone were extracted which were made into thin slates. These slates were then used to restore the irrigation channel. They did a marvelous job. Since a few years water is running through this channel again, and it is fantastic to walk along it. Between the Plaza de Lobos and the Barranco de las Albardas there is little height difference and the views are breathtaking. Our next target is to check out the part from this Barranco de las Albardas to the Río de Puerto de Jérez. If it is possible to continue walking alongside the channel, it could be a new walking connection between Bérchules and Trevélez. 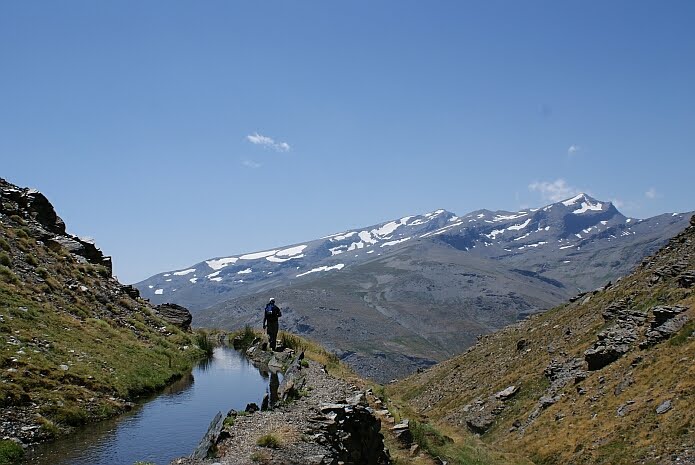