Publication on acequias "The ´Careos´ from Alpujarra"

There are two types of acequias to be found in the Alpujarras, there are ´acequias de riego´ irrigation canals and there are ´acequias de careo´. The ´acequias de careo´ fill aquifers so that the springs keep flowing in the dry months. At the same time they generate pastures - ´carear´ means to guide the livestock to graze - which explains the name of this type of canal. The ´Acequia de Mecina´, about which we wrote in our last post, is an ´acequia de careo´.
While looking for more information on acequias we found out that in December 2005 an interesting paper was written on the ´acequias de careo´ or ´careos´ canals as they are called in this essay. In 2006 an abstract of this Spanish thesis was published in the Revista de Ciencia, Tecnolgía y Medio Ambiente, called Technolgi@ y Desarrrollo. An English version of this paper on the ´careos´ can be found on the internet as well. The title of the Englis version is ´The ´careos´ from Alpujarra (Granada, Spain), a historical example of artificial recharge previous to XIII century applicable to the XXI century, characterization and inventory.´ This paper is written by A. Enrique Fernández Escalante, Manuel García Rodríguez and Fermín Villarroya Gil and arose from the Ph.D. thesis of the first author.
In the paper it is explained that these canals are traditionally dug in soils or rock, and are used like a technique for artificial recharge of aquifers in the Alpujarra area, mainly by means of waters of thaw of the Sierra Nevada range. It says that their origin goes back to at least the year 1139, but that its most extensive employment was reached in the last centuries of the Muslim time, XIII to XV centuries, when an intricate canilisation system was developed for the maximum use of the water. ´Careos´ canals facilitate the infiltration of the water. The water of the rivers and streams is diverted by these canals during the winter and the spring, to the flat areas where it infiltrates. Each canal has its areas of recharge called ´simas´ or ´cimas´. The investigators classified and defined a total of 23 ´careos´ canals. They state that the Acequia de Mecina is the largest to be found in the Sierra Nevada, that it is well-developed, well-conserved and that it has twenty ´simas´ were the water is distributed. One of the conclusions in the paper is: "It would be important to preserve and to maintain these systems of careos, given their high historical and environmental value." We think this paper to be very informative and we are glad that local authorities are each time more aware of the importance of these canals that have been operative for at least eight centuries. Since the declaration of Sierra Nevada as Parque Nacional y Natural in 1999, the program to recuperate the canals has been given high priority. "Where would we be without them?" in other words: ¡Si no fuera por ellas!, says the sign along the Acequia de Mecina. 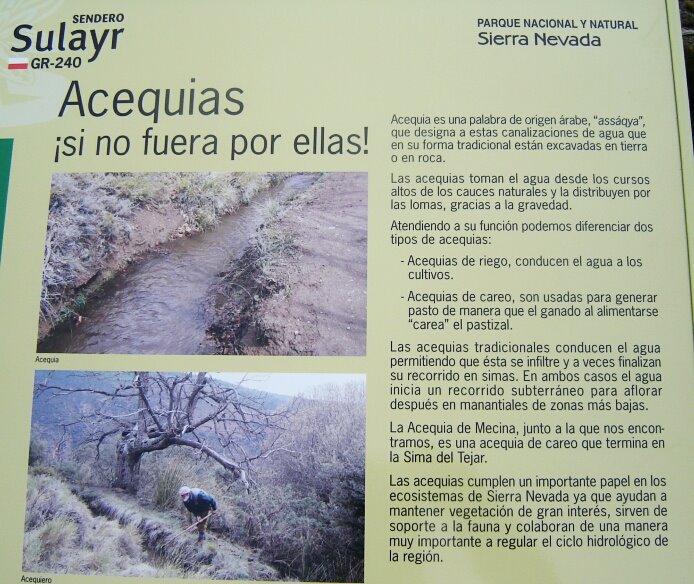