The same as with the flora, it may seem upon visiting Sierra Nevada that the fauna inhabiting the area is scarce, particularly in the highest parts. However, as occurs with the plants, a multitude of tiny organisms have adapted to the prevailing climatic conditions. There are a large number of different species of invertebrates of which about two hundred are endemic. Eumigus rubioi is one of the insects that can only be observed in Sierra Nevada, above 2,500 metres. This insect, like other orthopterans, avoid being seen and caught by blending in with their natural surroundings with their colour and their shape. Camouflage (´camuflaje´) or mimicry (´mimetismo´) is one of the survival tecniques for the invertebrates inhabiting the massif. Another adaptation is the ´winglessness´ (´apterismo´) or absence of wings (´ausencias de alas´). The biological explanation is based on the fact that wings represent no advantage because the high mountain ecosystem covers a relatively small area and so there´s no need to cover large distances. Enemies are scarce and grasshoppers can defend themselves by hiding behind rocks or in the thorny vegetation. This Eumigus rubioi caught our eye probably because we were looking at the endemic ´cuernecillos´ (Lotus corniculatus subsp. glacialis). So although some areas appear bare, they apparently boast a large number of unique species. Sometimes one just needs to develop an eye for it. 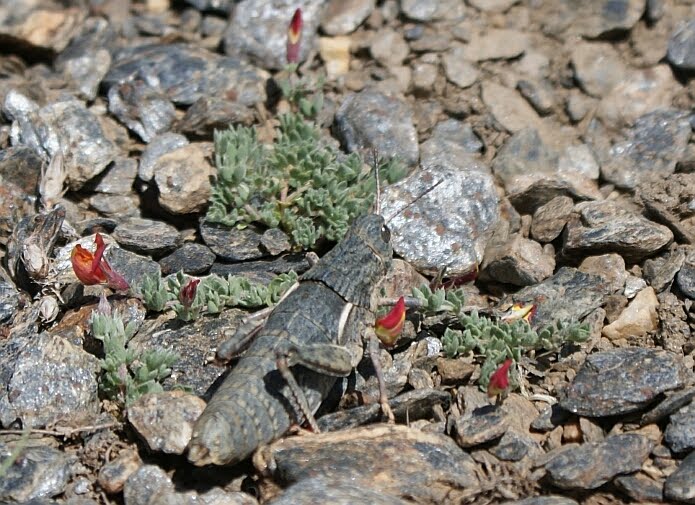