When a friend walked up our track a few days ago, she came back with photographs of a special white flower that she had taken along our ´pista´. Today we had a look ourselves and found out that it was a Cephalanthera longifolia or Sword-leaved Helleborine. This is apparantly a terrestrial orchid common in some parts of its range, such as southern France and Spain. In the English text on the wikipedia it says that it grows in damp woodland places. We found our specimen underneath a holm oak. It also states that in the UK this long-leaved helleborine is a declining species, and that conservation work is being carried out at a number of sites to safeguard it. In 2007 it was listed as a priority species under the UK Biodiversity Action Plan. The charity Plantlife International is leading this work in the UK. In the Dutch text on ´Wit bosvogeltje´ (´White bird of the woods´) on the wikipedia we can read that it is endangered in Belgium, and that it has probably disappeared completely in the Netherlands. The Cephalanthera longifolia was described by the Austrian botanist Karl Fritsch (1864-1934) in 1888. Thank you Jenny for spotting this special wild orchid on our finca.
PS Today, on the 24th of May, we saw about eight plants underneath some holm oaks near our entrance gates. Some of them still beautifully in bloom. This is almost a month after this picture was taken. We´re happy to have found more of this sword-leaved helleborine. 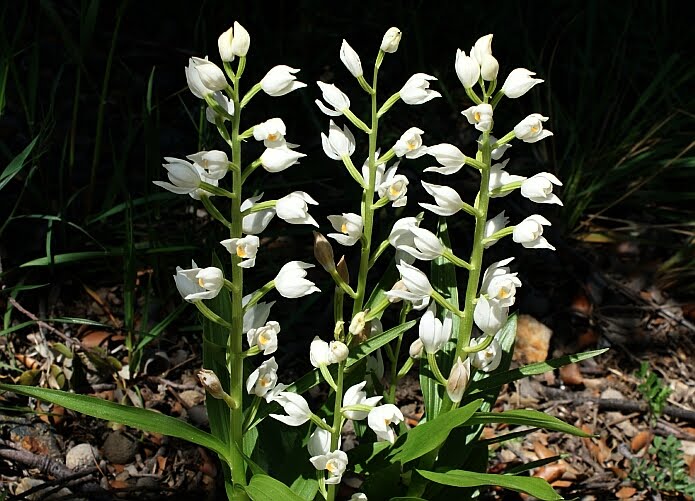