There are three long-distance footpaths that cross the area. One of these Gran Recorridos is the E4/GR7, an European route that calls in at Bérchules. The GR240 or Ruta Sulayr is a newly developed LDP that circles the Sierra Nevada and passes just above our Casa Rural. The third LDP, is the GR142 or Senda de la Alpujarra. It runs from Lanjarón to Fiñana, and has a total length of 144 kilometres. It passes through Cádiar, the village we can see from our terrace. Several of our own routes, coincide partly with this Gran Recorrido. Up to today, our routes cover the GR142 from Fondales up to Cádiar. We were curious to continue on this path a bit further westwards, and found a description in Walk! the Alpujarras with Charles Davis that looked interesting. His walk 26 ´Sierra Mecina´ would give us the possibility to get to know another part. Charles Davis promises spectacular views, and after having done this walk, we can defenitely agree on this. Besides, the ´carihuela de Fondales´ that zigzags up after crossing a Roman bridge over the river Trevélez, we consider as one of the most beautiful paths of the GR142 that we are familiar with so far. The gorge is truly spectacular, and walking on both sides of the valley of the river Trevélez we enjoyed immensely on this sunny January day. Nevertheless instead of the nine kilometres mentioned by Charles Davis, the walk turned out to be over twelve kilometres, and you should therefore count on four hours to do this walk. We incorporated this route with a detailed map and a description into our ´walks file´. 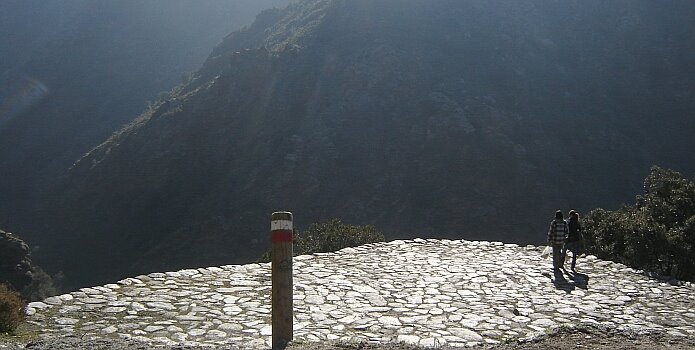