The Consejería de Medio Ambiente gives out a quarterly brochure called ´Acércate a Sierra Nevada´. It has, amongst other things, an agenda with the different festivities in the villages of the Parque Nacional y Parque Natural de Sierra Nevada and a recommendation for a walk in the area. In the last publication ´Invierno 2009´, the recommendation is a walk in the Taha valley, ´Sendero de la Taha´. It starts in Busquístar and has a total length of 9,5 kilometres. It passes through five pictoresque villages, namely Ferreirola, Fondales, Mecinilla, Mecina and Atalbéitar. We checked out this route today, and came to the conclusion that it was a perfect suggestion for a sunny winter day. While there was still a lot of snow to be found around the neighbouring village of Trevélez, in the Taha valley we experienced an early spring day. People were harvesting there olives, oranges were ripe on the trees, the first flowers and trees had opened up, a lot of birds were to be spotted and even a butterfly. It is nice to hear the water of the river Trevélez down below and to pass numerous fountains like the Fuente de Fondales or ´Fuente de la Ermita´ as it is called according the ADR. We enjoyed this walk so much, that we included it into our file, offering our guests a more detailed map and description. While working up the route, we found out that it is one of the official waymarked local walks called ´La Taha de Pitres´, and described briefly in the hiking guide that goes along with a map of Editorial Alpina (walk 9). It is therefore waymarked with wooden posts, but with the time the colours yellow and white of this Pequeño Recorrido, have almost disappeared completely. 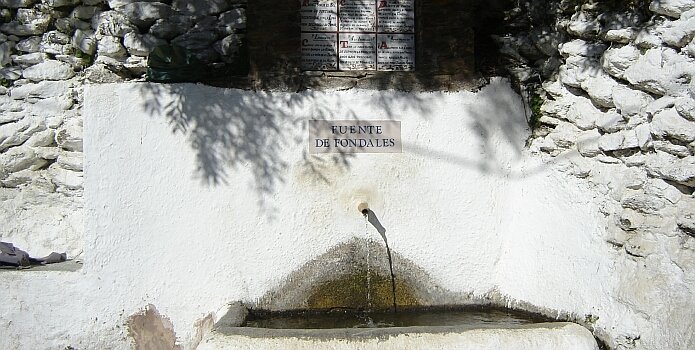