The Pseudochazara hippolyte is called Cuatro ocelos de Sierra Nevada in Spanish as it has four ocelli. This Nevada grayling can be seen flying in Sierra Nevada at altitudes between 1,400 and 2,700m from the third week of June to mid July. The female lays eggs on Festuca Indigesta (fescue grasslands or Nevadan stripped grasslands) that grows on the siliceous upper slopes and summits. The Pseudochazara hippolyte is included in the ´Libro Rojo de los Lepidópteros ibéricos´ (The Spanish Invertebrates Red Data Book), but classified as not threatened. In the Libro Rojo de Invertebrados de Andalucía it is classified as vulnerable. This Red Data Book is available on the internet as PDF and this is for us a good source of information on this butterfly. As there are isolated populations in the different mountainous areas different subspecies are described. In the Red Data Book it mentions that in Sierra Nevada there is a subspecies known as Pseudochazara hippolyte williamsi and that three other subspecies in Spain exist: Pseudochazara hippolyte augustini in the Sierra de Gádor, Pseudochazara hippolyte aislada in the Sierra de María-Orce and Pseudochazara hippolyte reverchoni in north-eastern Andalusian Sierras. According to the information available in 2001, it is mentioned that the populations of the Sierra Nevada are not endangered, whereas the other three subspecies must be regarded as vulnerable because of the low population density, the small number of colonies and the small area they occupy. There are also populations of the Pseudochazara hippolyte in the Ural, Kazakhstan, Kyrgyzstan, southern Siberia, Mongolia and China, where they fly at altitudes between 1,500 and 2,000m.
We had the privilige to see a number of Nevada graylings two days ago at an altitude of about 2,500m while walking over a ridge between the Alto the las Chorreras and the Peñon del Lobo in the sierra above Mecina Bombarón. The photo below gives an idea of the fantastic views from this ridge as well as of the habitat of the Nevadaheremiet as it is known in Dutch or Ocellé andalou as it is known in French. 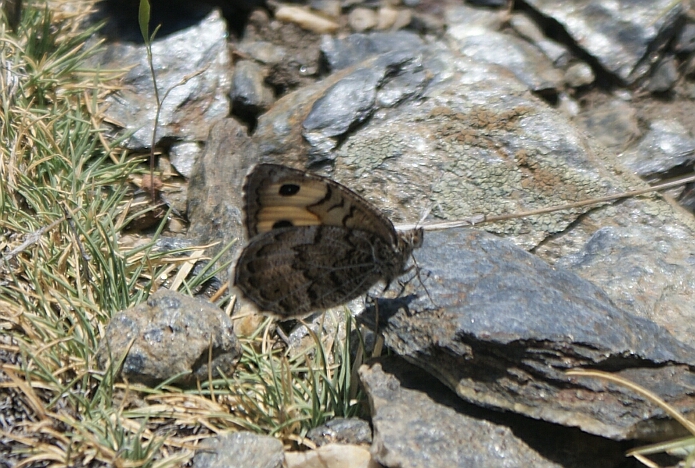 Related links: European interests group of Butterfly conversation in Spain; in the text on the highlights of the Sierra Nevada, Pseudochazara hippolyte or Nevada grayling is mentioned.