Just before the busy Semana Santa starts, we saw a change to check our walking route ´Cádiar por el GR7´ (see map with numbers) today. We walked from Alcútar (3) down to the Río Cádiar (7) without encountering difficulties, just enjoying the perfect temperature and the stillness of a brilliant spring morning. We already knew that the GR7 ´bridge´(7) had disappeared and that Paco from Narila had made a very good bridge to cross a side river. Luckily, he doesn´t mind other people using his bridge. You can follow a small path on the right river bank towards the dam, which can always be used to cross the Río Cádiar.
From Narila we tried following the GR7 that used to run just along the river (10-11), but too much of the path has disappeared. We advise everybody to just follow the small country road between Narila and Cádiar, which has also got its own pleasant atmosphere (9-12).
After we crossed the bridge in Cádiar (13) to continue towards Lobras, we witnessed how many plots of land have just completely disappeared! What a shame for the people that used to grow their fruit and vegetables here. In stead of walking on a small unpaved country road, you now walk in the very wide river bed.
The branch were it used to be possible to go left to Alquería de Morayma (14) is no longer there, neither the bridge to cross the river. From the ruin that used to be once a ´posada´, the path was recognizable again as it starts to run further away from the river. We saw people that have been lucky enough not to loose their land, busy on their fields. We continued our way to Lobras without noticing many differences, except for the unusual amount of water coming down from the Barranco the Albayar.

From Lobras we continued along the irrigation channel (halfway between Lobras and 17), instead of following the GR7 towards Tímar. We mentioned in an earlier post that it was difficult to cross the Río Tímar some weeks ago and that the new walking connection between these two villages along the Acequia de los Castaños is just as pretty. The lovely part between Tímar and Juviles (following the GR7 and not the route as indicated on the map), can be done without any difficulty whatsoever. 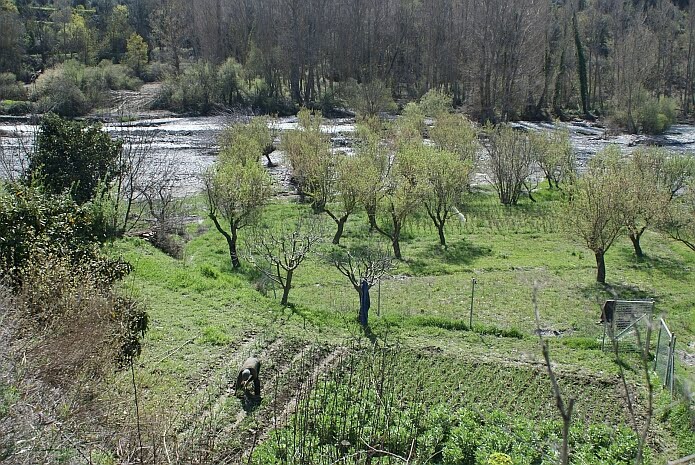