Walking along the ´Acequia de Mecina´

In an earlier post, we wrote that the local circular walk ´Junta de los Ríos´ has been changed into a linear walk. This new walk follows the ´Camino a Lanteira´ to the Junta de los Ríos. Instead of following the irrigation channel ´acequia nueva´ back to the village, it continues six kilometres northwards passing numerous ´cortijos´ or farm buildings. The threshing circles are no longer used, but tomatoes and beans are grown here, there are some fruit orchards and there are a few farms for cattle breeding. After having ascended 620 metres over ten kilometres in distance, you arrive at Cortijo de los Pollos. This cortijo is at an altitude of 1,944 metres one of the highest situated farms of Bérchules. Next to this cortijo, you find a sign saying ´Fin de Sendero Local´ , in other words ´End of the Local Walk´.
As we do not like linear walks ourselves, we were challenged to see whether we could continue from here and make a loop. We found out that by following an abandoned water channel behind this farm building, we could connect to the path along the Acequia de Mecina close to where it starts taking water from the Río Grande de Bérchules. Then we knew we had found a possibility to make a circular route. By following this canal down for 7,5 kilometres we could then connect to the GR-7 to get back to the village. We did this route when there was no meltwater running down, and were curious to actually see the system functioning. Today we took the opportunity and saw water running in the first four kilometres. This is the part from where it starts taking water from the river to a branch just above the ´pista alta´ and Cortijo de Fuente Merino. Altough there was no water running from this point to the Cima del Tejar, it is still a pleasure to simply enjoy its beauty. The Acequia de Mecina is well conserved and suplies water to the village of Mecina Bombarón. It is one of the most impressive canals in the Alpujarreas that we know and it is fascinating to imagine that it has been operative from the Muslim period. Our ´Acequia de Mecina´ route has a total length of almost 24 kilometres, four kilometres longer than walking the same way back of the Junta de los Ríos linear walk, but much more interesting. 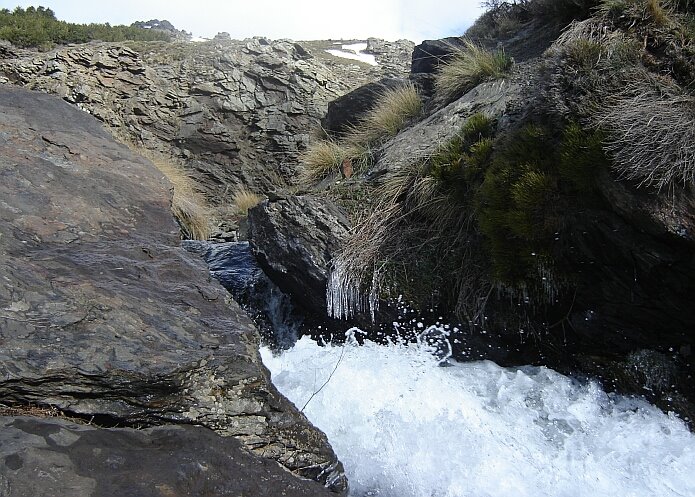