Laujar de Andarax is a village in the Almería province that we planned to visit for a long time and today we finally came around to do it. Thanks to the new Almería-Lanjarón road the travelling time is now only forty-five minutes and the weather forecast for today mentioned twenty-four degrees, sunny and no wind. A perfect day to check out one of the walking routes starting from this village that is quite well-known for its wines. The Sendero Hidroeléctrica is famous, but we heard at the Centro de Visitantes that it is not maintained as there are some steep stretches that are not considered safe enough. We decided to do the shortest of the two ´official´ short  local walks (signposted with yellow-and-white waymarks) of which we received copies at this visitor´s centre, namely the Sendero Monterrey (pdf folleto 3,86 mb) a circular walk of nine kilometres. The first three kilometres you follow a beautiful small path through a dense pine forest. Although you do not climb much more than three hundred metres, the views are fantastic once you come in a more open lanscape with grape vines growing at 1,200 metres. The return route is for a great part on a wide dirt track with fantastic views. We could not cross the Río Andarax easily, but we think this was exceptional. The holes of the bridge were blocked, so that the water ran over it in stead of underneath. Besides, the river was probably very swollen because of the amount of rainfall last week in combination with the melting snow. The snow that covered the Almirez (2,519 metres) and the Pico del Buitre (2,465 metres) a week ago has all been gone by now. A few hundred metres after having crossed the river with some difficulties the path has disappeared - probably as a result of the heavy rains last winter - and it looks as if you might need to cross the river again. This is not the case though, you need to stick to the left bank of the river for 200 metres although there is no clear path any more. The rest of the track and the two bridges that you need to cross are no problem. We are impressed by the beauty of this valley and will definetely go back to check other routes in the area. 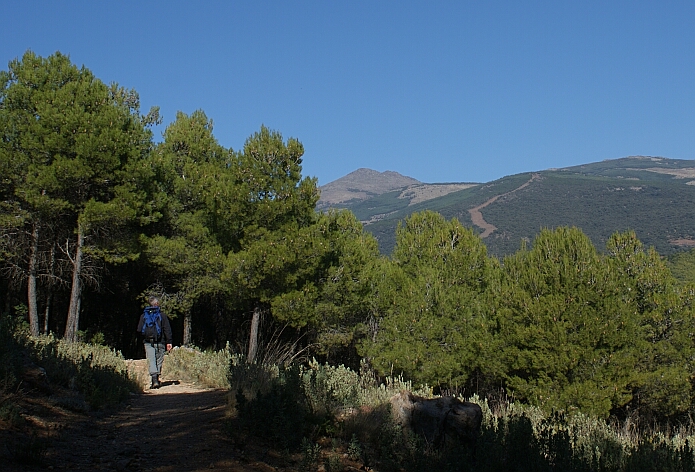 Our ´regulars´ know that we add new walks like this to our file with descriptions. For new readers it might be nice to know that we make our own maps, callibrate them and put our GPS data and waypoints on top of them. (click here for our GPS data of this walk). At waypoint 9 we investigated the situation of the damaged dirt track to find out that sticking to the left bank of the river does the trick. We did not edit (delete) this part of our GPS data. 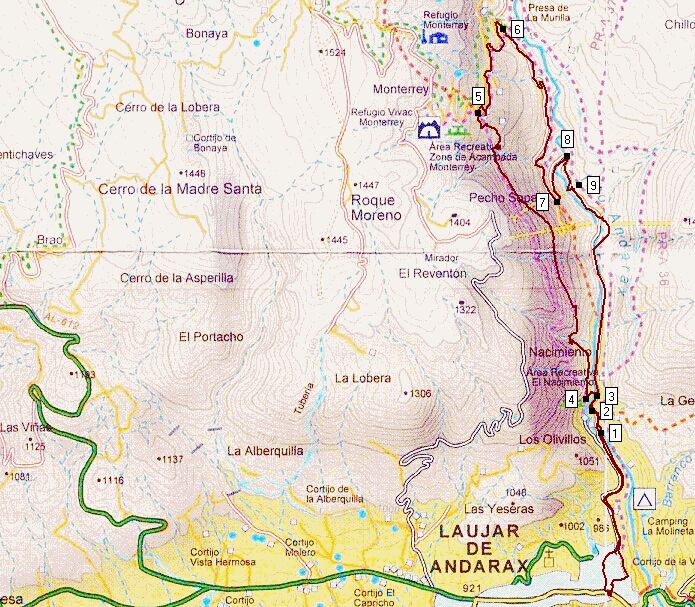 Beautiful - and such a lovely day too. I enjoy your posts so much.

We enjoy writing our blog and try to combine our enhousiasm with useful information. It is nice to hear that (sometimes far away) people read and enjoy our blog. Thanks for the comment, we apreciated it very much.
Regards Anita and Walter

We have stayed in Ferreirola twice - in September we were there for a week and hiked every day. I love the Alpujarra and look forward to the next opportunity to spend time there. In the meantime, I'll continue to enjoy what you share here.