The Puerto de la Ragua is one of our favourite starting points for walks throughout the year. As this mountain pass has an altitude of 2,000 metres, the temperatures do not easily get too high for summer hikes in this area. One of the interesting routes that starts at the Puerto de la Ragua goes up El Chullo (2,680m), the highest peak of the Almería province, and passes the Laguna Seca. There are a few signposts along the route, but not enough to find it without a map or description. On the internet various descriptions can be found like on the website of Top Walks which has got a good map as well. Last Sunday we enjoyed a magnificent day, enjoying the large amount of butterflies that fly around at this time of the year. After climbing about 200 metres, we saw a group of blues that at first we thought to be the ´Niñas de Sierra Nevada´. This butterfly has two scientific names: Polyommatus golgus or Plebicula golgus. Seeing a number of this Sierra Nevada blue was a nice surprise as we know that it has become rare and that it is restricted to a few locations, the ´Chullo´ being apparently one of them. The Nevada Blue flies during the month of July in a single generation and prefers open spaces of slopes and ridges. Its main threat comes from the building of tourist infrastructure and tourist activities. There are never many people in the area around the Puerto de la Ragua, but the building of the Sierra Nevada ski resort at the at other side of the mountain range, is a big threat for this endangered species. International agencies recommend an absolute protection, as well as in-depth study of their life cycle. More information can be found on the website of the IUCN, the International Union of Conservation of Nature and Natural Resources. On the website of the Consejería de Medio Ambiente de la Junta de Andalucía we can read what sort of work has been carried out to protect this Nevada blue; like planting the host plant of the Polyommatus golgus, the anthyllis vulneraria pseudoarundana. It is explained that these ´replantations´ have been fenced off to protect them from the  flocks of sheep and goats that are grazing in this area.
PS After coming across the website of the Observatorio del cambio global de Sierra Nevada, we now think that it is the Plebejus idas nevadensis or la ´Niña Esmeralda´ that we photographed near El Chullo. This Plebejus idas doesn´t have the white stains that distinguishes this Sierra Nevada northern or idas blue from the Polyommatus golgus or Sierra Nevada blue. There is another butterfly that looks very similar which is the Plebejus argus, we therefor hope that we have determined this butterfly correctly as the Plebejus idas subsp nevadensis. 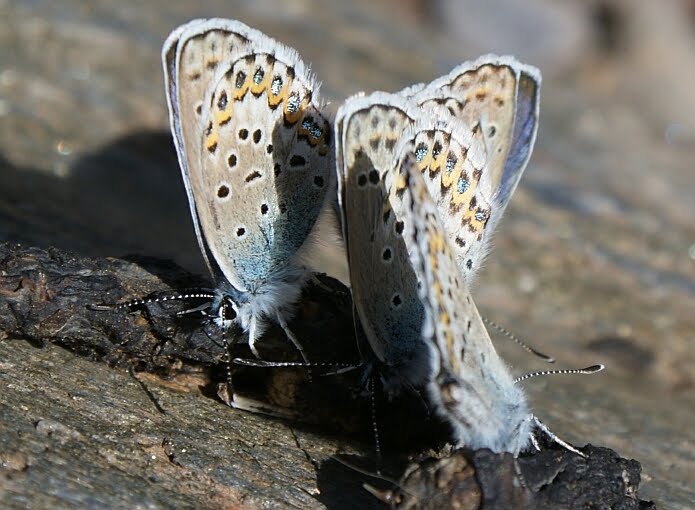