The Crocus nevadensis is the earliest flower of the Sierra Nevada mountain range. This azafrán de Sierra Nevada, member of the iris family, has the amazing ability to thrive in the late winter or early spring, even where there is still quite a lot of snow. In sheltered spots, it may start to bloom in February. We saw a large number of these solitary white flowers on the 1st of April, between Trevélez and the Alto de Chorrillo, at an altitude of about 2,200 metres. A few years ago, we saw many of them while climbing up from the Puerto de la Ragua to the Chullo. The circumstances were similar; the last day of March, the same altitude and close to the snow line. This white or mountain saffron was first described by the Spanish botanist Mariano de Amo y Mora (1809-1894), and has therefore the official name Crocus nevadensis Amo. The addition ´nevadensis´ can be misleading though, as it not only grows in the Sierra Nevada. It can be enjoyed in other mountainous areas in southern Spain and in northern Africa as well. As it does not grow in other countries, it is an endemism iberonorteafricano. 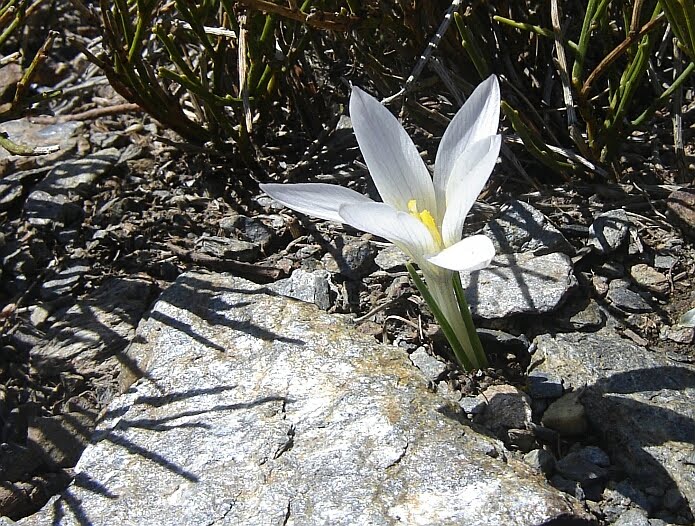