Last week it was difficult to walk the GR7 from Yegen to Mecina Bombarón. Between Yegen and Montenegro some large rocks had blocked the path, and there was a danger of more rocks coming down. Besides, there was a lot of water running through the Río Mecina near El Golco. An emergency bridge has been made at that point, but certain days the water level was much higher than the bridge itself. As the weather improves, water levels drop rapidly and today we heard that the GR7 between the two villages no longer imposes serious problems for walkers.

Nevertheless, it reminded us of a walking route at the other side of the main road called Sendero de las Encinas. It is still on the brochure of the town hall and on the website of Alpujarra de la Sierra, although it was not newly waymarked like the other small local walks. A few years ago we tried walking this route starting in Mecina Bombarón, but we got a little bit lost as the waymarking wasn´t very good and the path was overgrown at some parts. Now we thought we would give it a try again, walking the route in the opposite direction. From the village of Yegen we followed the Sendero de la Salud, which starts next to the play ground. This route is one of the Senderos Locales that was recently waymarked anew with wooden posts with white arrows. It follows the old Camino Real, a beautiful cobbled path that took people to Granada or Guadix on the other side of the sierra.

Where the Sendero de la Salud starts to go down, you leave this waymarked route by keeping to the left. There is an old yellow-and-white sign on a chestnut tree a few metres further on, but that is about the last one you will see for about an hour. You keep going up on the Camino Real until you see a marker post of the Sulayr route. Here you go left down a dirt track towards a holm oak grove. Here you see a few very old ´encinas´, which have given this route its name. In the distance you already see the path that will take you back to Mecina Bombarón. You get to the main road close to the Fuente de los Remedios.

It is only on the last part, where you no longer need them, that you see yellow-and-white waymarks again. The Sendero de las Encinas would normally take you over the old Roman bridge back to the vilage. Unfortunately the bridge got so badly damaged, that you need to use the main road to cross the Río Mecina.

As the GR7 does not give any problems anymore, combining the two walking connections is possible again. The two make a really varied and attractive circular walk of 14,5 kilometres. In case that you find the circular route too long or strenuous (height difference of almost 700 metres), it is possible to make use of the public transport. Don´t trust the schedule you find on the website of the local bus company ALSA too much though. The first time we tried to get on the bus to Yegen it left Mecina Bombarón at 11.15 hours, half an hour earlier than the time you see on the internet and the timetable in the town hall. After asking a few people, we understood that it mostly leaves at aroud 11.30 hours. There is a bus going from Yegen to Mecina Bombarón at 15.30 hours according to the timetable on the ALSA website, but we do not now how realiable this information is. 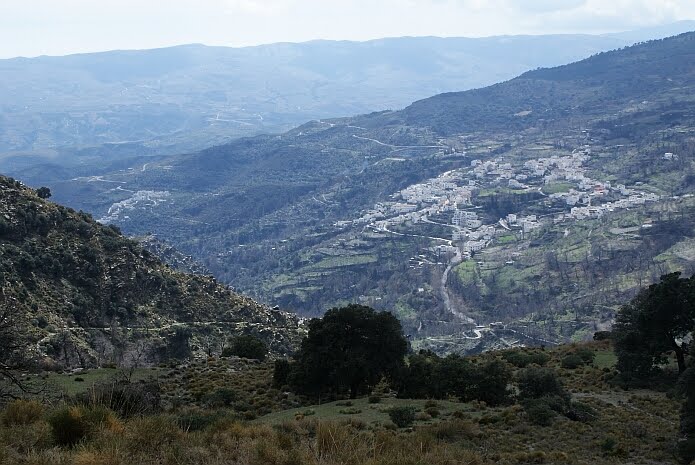 Related links:
All GR7 stages in the Alpujarras with maps , from the website Mancomunidad de municipios de la Alpujarra Granadina

"large rocks" is a bit of an understatement - one is the size of a small car! If we can manage to get 3 or 4 dry days we are hoping to get a digger in to give us access,
John (Montenegro)

Something that might be of interest is that the signpost at the GR-7 T-junction blew over at New Year and is currently in Mariano's courtyard until we can get some materials to set it in concrete. Coming from Yegen it shouldn't be a problem because the signpost (To El Golco) is still there. But from Golco people will have to know to turn left here to go to Yegen. Even with this signpost and maps and instruction a lot of walkers still end up walking past our Cortijo - so we'll expect even more now :)

There is a pic of one of those "large rocks" here.