Throughout the year 2009, different exhibitions and activities are organised to commemorate the XX ´Aniversario de la Ley de Espacios Naturales Protegidos de Andalucía´. We can find the programme for this on the website of the Junta de Andalucía. ´Música en las Montañas´ forms part of the festivities organized by the Parque Natural y Nacional de Sierra Nevada. For this important event, a choir was formed which gave a concert last night on the church square of Pitres. Apart from a performance of the choir with an orchestra, there were recitals of chamber music with cello and piano. Cat Jary, initiator of the concerts in the Alpujarras, played the cello with her former music teacher Bernard Gregor-Smith, pianist Yolande Wrigley and the talented son of this couple Ben Gregor-Smith. This quartet gave a beautiful recital of chamber music on the threshing floor of Capilerilla and later on in the evening on the Plaza de la Iglesia in Pitres. It is quite something that professional musicians that are used to playing in world-famous concert halls, are prepared to play in the open air on an ´era´ in the Alpujarras.
Although tonight is the last evening of the special concerts of ´Música para Sierra Nevada´, the programme ´Música en las Montañas´ continues with concerts on the 4th and 5th of September, the 31st of October and the 1st of November. 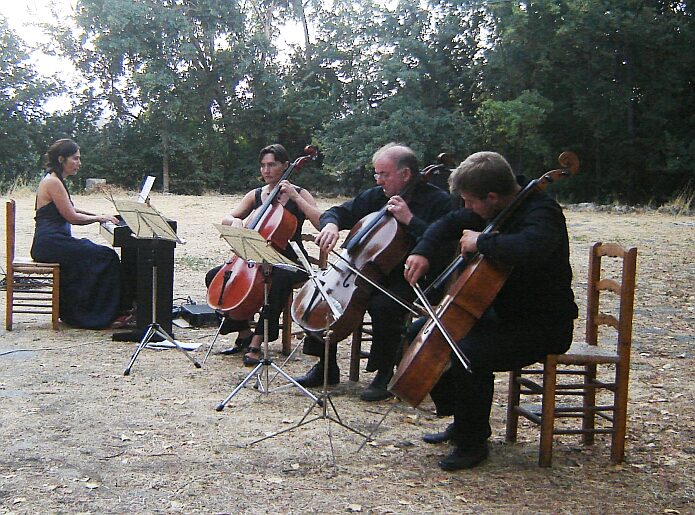