Capileira is like Trevélez a good starting point for a walk in the summer because of its altitude (1,436 metres). A number of years ago there were eight waymarked routes in the Poqueira valley, and each one was signposted with a different colour. One of our favourites was the ´yellow´ route, the Acequias del Poqueira. A few days ago, we found out that the waymarking of the routes in this area has changed. The walk ´Acequias de Poqueira´ has remained the same, but it is now an official Pequeño Recorrido, the PR-A 23. It has been newly signposted with yellow-and-white and signs with the name of the walk on some crucial points. A large board at the starting point gives now information on this itinerary of about sixteen kilometres.

The first part of the route we did in company of a farmer on his way to his cortijo. He said he was now the only person in Capileira to go with his mule to his farm where he still has a herd of goats. Until reaching his cortijo, he talked animatedly about the past and the present, his family and his farm. We continued along the river Naute trying to imagine what this area looked like in earlier times when the land around the ruined cortijos was still being cultivated. The Cortijo las Tomas at 2,100 metres is the highest farm building on this route. It is also a junction of paths, one continues another four hundred metres uphill to the manned refuge, the Refugio Poqueira. We continued on the waymarked path in easterly direction that winds around the contours between the Acequia Alta and Acequia Baja for four kilometres. It was a clear day, so in front of us we could see the Mediterranean Sea in the distance and to the right we had good views of the highest mountains of Spain. On an information board just past the Corrales de Pitres, it is explained which mountains you can see from this point. Quite surprisingly we were the only hikers to enjoy these impressive panoramic views on a Sunday with the perfect walking weather. The path passes many springs, rivers and acequias, so there was still some verdant growth that attracts lots of butterflies. It is definitely a route we can recommend, also in high summer. It is well waymarked and information on this walk incl gps track can be found on the website of the Consejería de Medio Ambiente of the Junta de Andalucía. 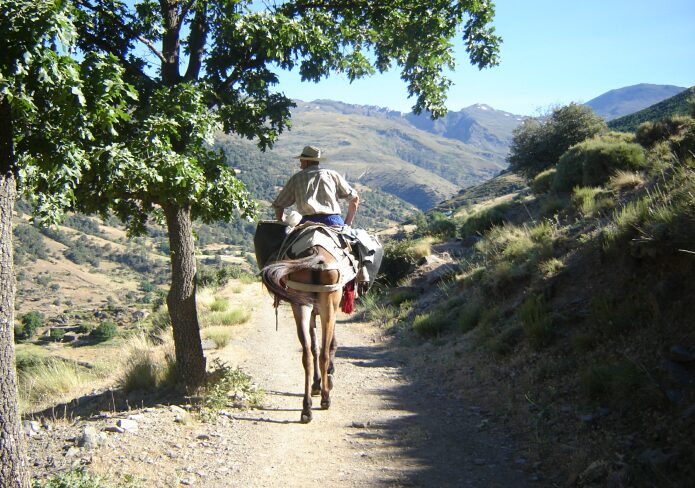