Publication on the ´Ruta Medieval´

A small guide has been published on the ´Ruta Medieval´, an interesting and attractive route that was waymarked in 2006. This is a linear short walking route through the historic site of the ´Alpujarra media´ and the Tahá valley. In this protected area there´s an extensive network of medieval paths. This route of 21 kilometres takes the walker on some paths that were already mentioned in documents drawn up in 1574. The route is divided in four parts and officially starts in Pórtugos and ends in Juviles. It passes through the villages of Atalbéitar, Ferreirola, Busquístar, Cástaras and Nieles. There are numerous signs on the route that give historic and cultural information on the water channels, the threshing floors, the steep paths, the mines and the old drover´s routes. This same information can be found on the website of Alpujarra Turística of the Mancomunidad and the GPS track of this PR-A 299 can be downloaded from this site as well. The information on the signs along the route, website and in the guide are only in Spanish. Several copies of this guide ´Huellas del medievo en la Alpujarra´ have been distributed over the different town halls and tourist information points to hand out for free to people interested. The tourist information office in Orgiva charges three euros for a copie, but all the information can be found on the website of Alpujarra Turística as well. Of course the route can be walked in both directions. For the people who would like to walk the Ruta Medieval from east to west, we have a map and description in Spanish, English and Dutch of the first three sections, up to Busquístar. Adding up the extra kilometres to get to Juviles, it is almost half a marathon from ´El Paraje´ to this village as well. There is also a small booklet for children on this route, called ´La Ruta de Mateo´, a copy can be asked for at the different town halls in the area. 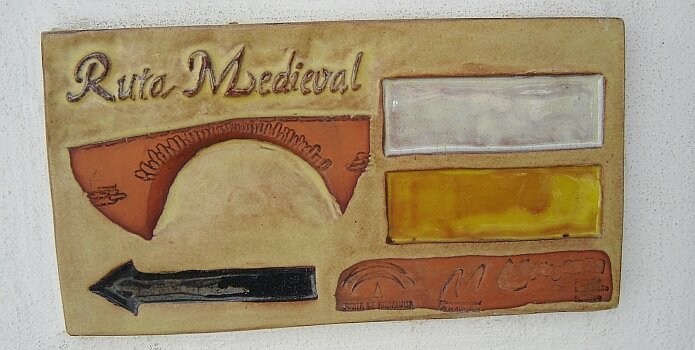